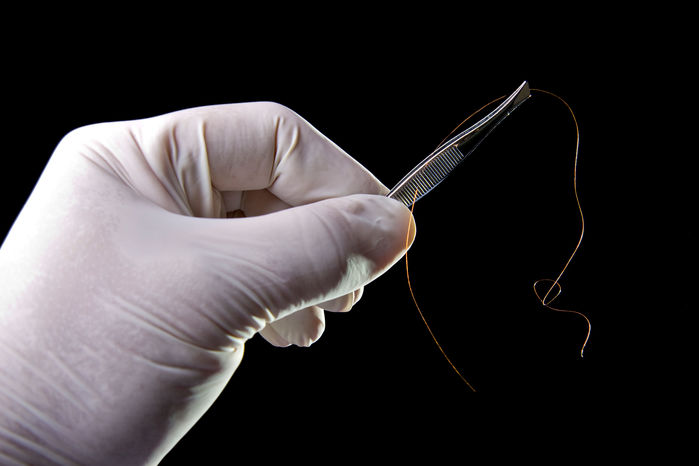 New Scientific Method: One Hair Can Catch a Suspect

A new forensic technique could have criminals—and some prosecutors—tearing their hair out: Researchers have developed a method they say can identify a person from as little as 1 centimeter of a single strand of hair—and that is eight times more sensitive than similar protein analysis techniques. If the new method ever makes it into the courtroom, it could greatly expand the ability to identify the people at the scene of a crime.

To get reliable data from hair, forensic scientists previously needed DNA from skin still attached to hair follicles. But recent technologies have instead analyzed proteins in the hair itself, like keratin. Because the sequences of amino acids in proteins vary slightly from person to person based on their genetic code, this information can be used to identify people with a high degree of accuracy without DNA.

The catch? Most methods require several steps of grinding and heating the hair, which destroys much of the protein. And scientists might not always detect enough variation in the remaining proteins to make a confident identification.

To get more proteins for analysis, scientists at the National Institute of Standards and Technology (NIST) did away with the grinding and developed a method with only one step: heating the hair in detergent solution.

When the researchers used mass spectrometry analysis to find out what they had extracted from the dissolved hair, they found they recovered more proteins—and their subunits, peptides—than with other extraction techniques. They also identified a dozen new protein building blocks called genetically variant peptides (GVPs) that differ among individuals. “The more GVPs you have, the more people you can distinguish from each other,” says NIST health specialist and study author Zheng Zhang. “It’s like having additional genetic alleles in a DNA profile.”

These new GVPs join thousands of others in NIST’s library of peptide sequences. GPVs aren’t yet used to identify people in criminal cases—but could be in the future, Zhang says. She adds that the term “identify” should also be taken with a grain of salt: Protein sequences are highly individual, but there’s still a chance—one in 1 million or even one in 10 million—that two people share the same one. (Hair in this study came from a biobank and the researchers didn’t try to identify the donor.)

The new method could beef up the somewhat previous unscientific field of hair forensics. Past methods of examining a hair’s curvature, thickness, and microscopic features were later proven ineffective. In fact, the Federal Bureau of Investigation admitted in 2015 that hair comparison evidence led to flawed testimony in more than 200 federal and state cases.

Still, the new method has its drawbacks, says Glendon Parker, a biochemist at the University of California, Davis, and a pioneer in the use of proteins as forensic evidence. Chief among them is the amount of time and expertise it takes to extract the proteins once the hair has been dissolved. To get enough material to build a profile, scientists need 1 day or more, as well as extensive experience with sophisticated protein analysis techniques, Parker says. The time-consuming new technique might be the best choice for discovering new GVPs, he says, but other less intensive techniques may be better for forensic use.

In addition, no identification method based on genetically variant peptides in hair proteins has been used in court. There are still a lot of questions to be answered before that’s a reality, says Monte Miller, a forensic expert who has testified in many cases involving DNA evidence. For example, how do dyes and products affect hair proteins? And do the protein characteristics in hair change with age?

These answers are likely “a long way off, but the research is interesting and it’s useful,” Miller says. “Anything that gives us more discrimination and more information is always good.”