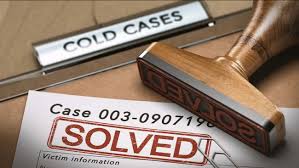 There is an old saying regarding Cold Case Investigations:

“The suspect is hidden there in the original case file.”

Oftentimes, it was someone who was previously interviewed as a suspect or a witness, but cleared at the time. However, as years go by and perhaps new clues are unearthed, previously cleared suspects now look like good prospects.

What is the primary purpose of solving cold cases?

THE SAME AS NEW CASES: TO BRING THE PERPETRATORS TO JUSTICE AND TO PROTECT SOCIETY FROM DANGEROUS INDIVIDUALS

I have posted below a recent presentation I did regarding cold case investigations. I know you will find it useful in your writings, no matter your genre. So use the real deal facts below to use them in your works: perhaps have the detectives not follow protocol . . . or buck the system aka Dirty Harry . . . or slip up . . . or solve a cold case by following my protocol.

Lots of meat on the bone!

There are three types of cold case re-openings:

Cold Cases should be divided into (3) categories:

Cold cases are most likely solved by:

Factors that Affect Clearance of Cold Cases (in order of importance):

A fatal error that commonly occurs is when a cold case was initially classified as a “missing persons” case due to a victim’s prior behavior, but later becomes a “suspicious” or “homicide” investigation. This also occurs when it may have been classified as a burglary, and the victim was found dead, but in reality the victim was murdered with the crime scene staged to appear as a burglary as well. This is done by the suspect to divert the police off the path of possible suspects. Most commonly this occurs when the suspect could easily be linked to the victim by the police.

You are a police officer on patrol.

Robbie Runaway, age 17, has a prior history of being defiant toward his parents, abusing drugs, staying out late, using his older brother’s car without his permission, and frequently running away from home. He is known to hang with a group of drug suppliers 7-10 years older than him.

At 2315 hours, his parents call to report to your department that he did not come home from his night job after school as a Baker Prep Assistant for Panera Bread. His schedule for work is 4 p.m. until 10 p.m. He usually drives straight home after this shift, the ride being 30 minutes. Your department responds to his parents’ home, and based on his prior history, take a missing persons report. He was reported to have driven his own car to Panera. An officer contacts the Panera manager after hours who confirms Robbie did work his entire shift. At this time, no foul play is detected.

At 0120 hours a patrol officer in a town adjacent to Robbie’s home observes a vehicle that has been driven off the road and into a shallow culvert. The officer also observes the both driver’s side windows smashed, the engine off and the front passenger wide door open. The headlights are on. On the front seat is a cellphone, a sandwich in a Panera paper bag uneaten, 4 empty beer cans and a half empty can of beer. A crushed and opened pack of Parliament cigarettes was found on the ground next to the open passenger door, and a tire iron was found approximately 25 feet from the car in the culvert. The officer runs the license plate, records the information for his report and continues on patrol. He notifies your department; you in turn determine he must had left the vehicle after driving into the ditch. You notify his parents and arrange for the vehicle to be towed to their home.

Over the next 72 hours Robbie’s parents increasingly pressure your department to determine what happened to him. In the meantime, his parents brought his car to a repair shop and his windows were replaced.

One week after disappearance, an anonymous tip is sent to your department via e-mail from a computer in a local library that Robbie was involved in a sexual relationship with a female co-worker at Panera that was 34 years old and married.  She had been confronted by her husband about this after her husband was told by a concerned neighbor who stated he saw Robbie and the co-worker embracing at the rear of the store in the past.

Your department interviews the female co-worker who denies the allegations. She admits that her husband did confront her, but she denied the affair to him as well. He told her that he was going to “kill that fuckin’ punk” but she did not feel he was serious about that comment.

Several employees interviewed at Panera stated that in the last week they had seen a dark-colored small sized pickup truck parked in the far end of the parking lot idling with its lights off at closing time. As it was not unusual for family members and friends to wait in the parking lot at night to drive other employees home, they did not report the matter.

You check the motor vehicle records and determine that the female co-worker’s husband drives a black Toyota Tacoma pickup truck. He is interviewed and denies being in the parking lot or any involvement.

Robbie’s parents contact the media and give interviews as to how your department is not doing anything to find their son, as you still feel he has run away from his problems after smashing up the car.

Valuable evidence has either been destroyed, not preserved, never collected, or tainted to the point that accurate lab results would be refuted in court by a defense attorney. Crime scene photographs and video do not exist. There were no crime scene diagrams performed. Your “missing persons” case has morphed into a poorly investigated “suspicious” one. The Governor has called for your department to be investigated by the FBI. Robbie’s parents sob to the media about how your department should be disbanded. And to add insult to injury, your department lost the police discount at Panera.

It is ALWAYS better to have evidence you collected but MAY not need, than to WISH you had evidence you did NOT collect but later did need.

Review all physical evidence for either submittal or resubmittal. Advances in forensic science benefit a cold case. As the years have passed, a suspect’s fingerprints have entered AFIS, prints that at the time of the crimes were found at the scene but did not match anyone – because the suspect, at that time, was never arrested or printed for any reason, and AFIS didn’t exist. All physical evidence should be reviewed, and if never submitted, be submitted; if previously submitted, it should be evaluated for resubmittal for more advanced testing. Submit DNA evidence to CODIS. Review any ballistic evidence for submittal or re-submittal for analysis of striations/lands and grooves on shell casings.

“Success is not final. Failure is not fatal. It is the courage to continue that counts.”